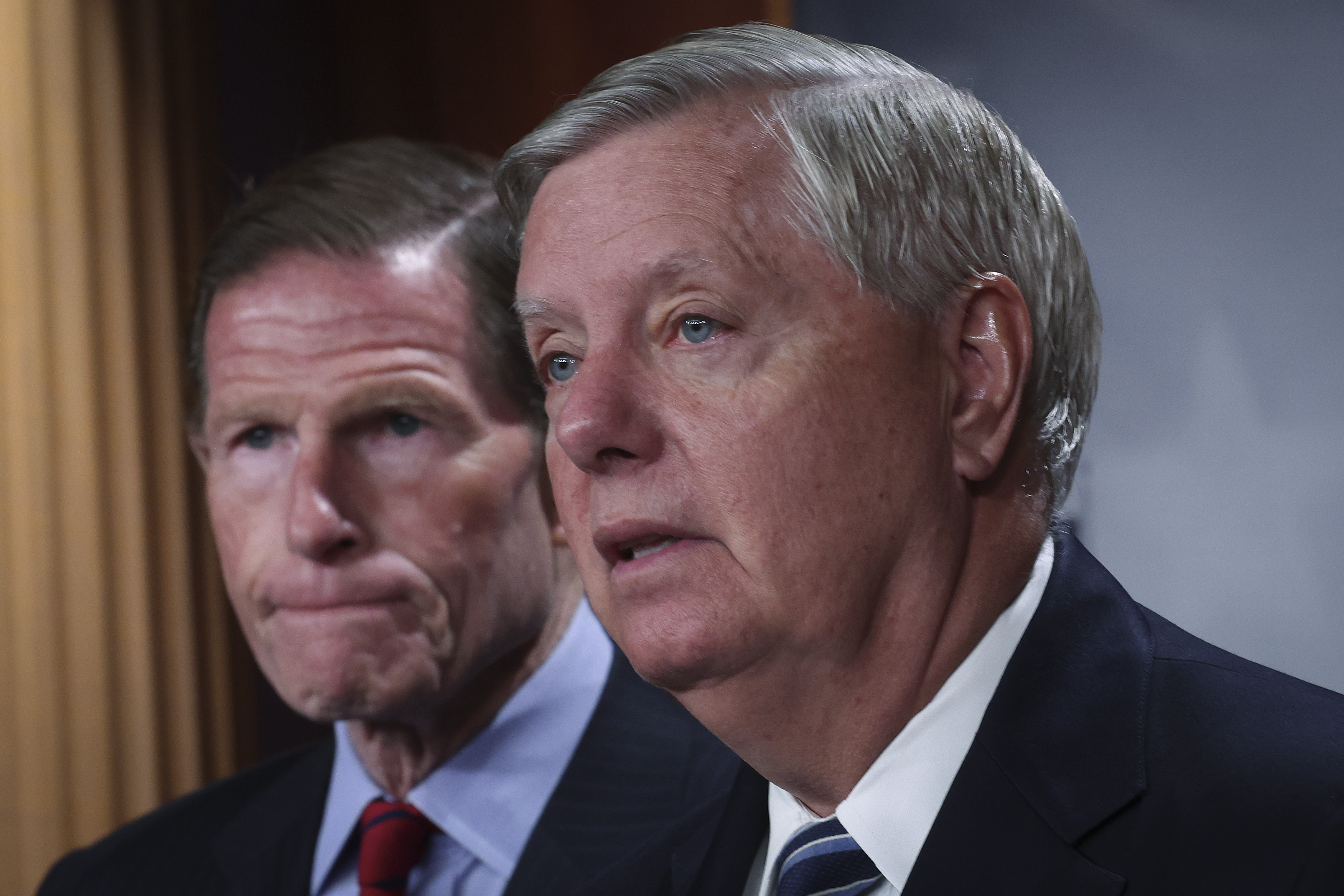 “We are dealing with Hurricane Putin, for the lack of a better word,” Graham told reporters. “He’s trying to rewrite the map of Europe. He’s trying to do by force of arms what he can’t do by process.”

Added Blumenthal: “It is a land grab. It’s a steal. And it is another craven, brazen tactic by Vladimir Putin to test the West’s support for Ukraine and we are having none of it.”

On Wednesday, State Department spokesperson Ned Price told reporters to expect “additional measures” in the days ahead. In the meantime, it didn’t appear that President Joe Biden would order any change in approach to supporting Ukraine.

“This also doesn’t change our thinking on the outlook. We’ve always been prepared for the long haul, and the Russians have as well,” a senior administration official told POLITICO.

Some of Biden’s allies on the Hill, though, expressed concern about the impact of Putin’s annexation effort. Senate Foreign Relations Chair Bob Menendez (D-N.J.) said Putin’s move “makes it all the more difficult for the Ukrainians to find a way forward.”

“It also should consolidate the condemnation of the world, because everybody knows that at the end of the day, [the referendum is] the biggest farce that has happened,” Menendez added.

The move to lay claim to the Luhansk, Donetsk, Kherson and Zaporizhzhia regions in Ukraine’s south and east was relatively costless for Putin. He played to his domestic base and seemingly added legitimacy to his illegal invasion, regional experts said. Putin knew this week’s sham votes would have little effect on the West’s response to Russia’s invasion of Ukraine, they said.

The goal was “to have a similar situation to Crimea,” where Russians seized the peninsula after another sham referendum in 2014, said Jeffrey Edmonds, who handled the Russia portfolio in the Obama administration’s National Security Council. “No one agrees with it, but no one is going to do anything about it either. That would give him a revised victory — or enough of one — because he would have hobbled Ukraine.”

The question now is whether Russia will change its tactics following the Friday announcement.

Concern is swirling within the Biden administration that Putin will consider any attack in the regions as an attack against Mother Russia — and could use it as a pretense to escalate the war effort.

One European diplomat who spoke on the condition of anonymity to discuss the conflict threw some cold water on that idea, pointing out that Russian warnings about attacks on the annexed territories would ring hollow. “Ukraine has hit Russian targets in Crimea several times, and Putin didn’t respond even though he claims Crimea is now part of Russia, too.”

The White House also remains on alert about Putin’s nuclear threats, but has seen no evidence that Russia has changed its nuclear posture after his speech last week, officials said.

U.S. intelligence officials also do not anticipate the nuclear posture will change after the announcement of the referendum results, the people say. The White House has warned Putin of catastrophic consequences if he were to use nuclear weapons, but has not specified what the response would be.

The Biden administration does not believe Putin will declare victory over Ukraine after the annexation and use it as an “off ramp” to seek a negotiated peace. Rather, the annexation — and the apparent sabotage of the Nord Stream pipelines — appears to lock Russia into the war for the long term and also would likely further discourage Ukraine from negotiation.

Meanwhile, lawmakers from both parties are keeping up pressure on the White House to respond to Russia. Blumenthal and Graham are pushing legislation to designate Russia as a state sponsor of terrorism — a move that the State Department thus far opposes.

Lawmakers said they are encouraged by Ukraine’s resolve.

“I see no letup whatsoever. None. If anything, strengthened determination,” Blumenthal said. “I think annexation is a ploy that will have no effect on Ukrainian will to fight and it should have no effect on our willingness to support that fight.”

Graham said he sees no possibility of an off-ramp for Russia, particularly as Putin grows more provocative.

“The world is not going to accept this annexation,” Graham said. “The idea of an off-ramp other than him withdrawing completely from Ukraine is becoming less and less.”

The other possibility — the one seen as far more plausible — is that Russia settles in for a long-term fight.

The annexation will not be recognized by the vast majority of the international community. But internally, it will tie the Kremlin’s hands, requiring it to fight for the territories in Ukraine’s east that Kyiv has taken back in recent weeks. It could also be used to justify more brutal Russian tactics.

Putin “is in a really tough place,” Sen. Angus King (I-Maine) told POLITICO. “And that, to me, increases the danger. If I had to predict, I think the most likely manifestation of that will be what amounts to carpet bombing of civilian areas in Ukraine — that’s been his pattern in Chechnya, Aleppo, etc.”

Whatever Putin’s rationale, his forced referendums and looming annexation will be met with stiff resistance from the U.S. and its allies. “We are dead set against it,” one Western diplomat, who asked to speak anonymously before their government could formulate an official response, told POLITICO.

Finland’s President Sauli Niinistö tweeted Thursday that the Russian-orchestrated voting in Ukraine will “not [affect] Ukraine’s borders, they don’t change the map. Ukraine’s sovereignty and territory is indivisible and inviolable. Finland will not recognise the results of the illegal referenda or annexations.”

Putin’s latest gambit to scratch out some wins comes as Ukrainian forces claw back territory in the east and south. The Ukrainian gains this month came in a lightning counteroffensive around the city of Kharkiv. Their success appeared to surprise even Kyiv, but over the past two weeks, the advances have slowed to a steady grind inflicting heavy losses on Russia.

The Pentagon assesses that the first of the soldiers called up in Putin’s partial mobilization have arrived on the battlefield “in small numbers.” But officials are skeptical that the Russian president will reach his goal of mobilizing 300,000, given his military’s dysfunction and the social unrest the call-ups have caused.

The mobilization indicates the Kremlin still sees a way to prolong the war and perhaps end up with a win or a draw simply through attrition of Ukrainian forces and the weakening of Western resolve if the fight drags on month after bloody month.

“That they ultimately decided to do this suggests that they still think there is an operational play at this level,” said Dara Massicot, a Russian military expert at the RAND Corporation, and former Pentagon official. “They still think that this can save it” for Putin.