Kourtney Kardashian and Travis Barker are married! Kind of.

Reports have emerged that the couple, who have been dating since the end of 2020 and got engaged in October 2021, tied the knot in Las Vegas at around 1.30am local time on Monday morning in a 30-minute ceremony, after attending the 64th Grammy Awards.

Per TMZ, Kardashian, 42, and Barker, 46, asked for an Elvis Presley impersonator to officiate their ceremony — though it wasn’t legally binding. They wore the same outfits they donned to attend music’s biggest night hours earlier.

Sources told Page Six that the newlyweds, although they did have a ceremony declaring them husband and wife, did not procure a marriage license, so “on paper it’s not legal yet.”

According to Clark County — which governs Las Vegas — records, the couple did not apply or receive a marriage license or certificate. One Love Chapel, which is where the A-Listers tied the knot, usually doesn’t conduct a ceremony if a couple does not have a marriage license, per their website. It appears, however, they made an exception in this instance.

Similarly, the couple reportedly banned One Love Chapel staff from taking pictures, and provided their own photographer and security instead.

Like Joe Jonas and Sophie Turner before them — who also got married in Las Vegas by an Elvis impersonator in the early hours after the 2019 Billboard Awards before an elaborate ceremony in France — reports from TMZ indicate that the Kardashian-Barker elopement will not be the couple’s only wedding, and sources say there are set to be “several” celebrations with “lots of fanfare.”

This is Kardashian’s first marriage, and the Blink-182 drummer’s third. Kardashian shares three children with Scott Disick — the couple were together on and off for 10 years and never married — and Barker shares two children with his ex-wife, former Playboy Playmate Shanna Moakler.

Kardashian and Barker have been friends and neighbours for years, but only began dating in December 2020, before going public with their romance three months later.

Barker proposed to Kardashian on a beach in Montecito, California in a black and white striped shirt and dark pants, while Kardashian wore a long, flowing black outfit.

She said yes surrounded by a lavish display of white candles and countless red roses.

The duo have not been shy about their commitment to one another and big plans for the future, with a trailer for the Kardashians’ new Hulu series revealing Kardashian has started IVF with Barker. 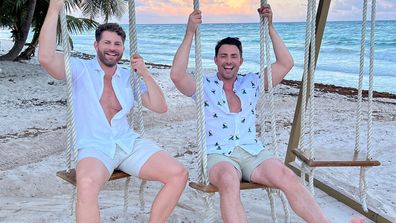 Celebrity weddings 2022: Stars who got married this year