Until that classless moment, everything else seemed near-perfect for the Black Stars on their return to the Baba Yara Stadium, as they held the Super Eagles to a goalless draw at home.

After Ghana’s disappointing group-stage exit at the 2021 Africa Cup of Nations (AFCON), the Black Stars’ stock plummeted to an all-time low, culminating in a lack of belief in the team.

However, Otto Addo’s side held their own on Friday evening against a strong Nigerian team and managed to repair some of their damaged reputations. This was by no means a dominant performance but the Black Stars were far from the fragile side that showed up in Cameroon two months ago.

Here, they were organised at the back and structured all-round the pitch. For the first time in over two years, one would struggle to name a man of the match for Ghana, as several players stepped up.

Jordan Ayew equally put in a good shift, first from the left flank and later as the main striker. The downside, though, is that the 30-year-old once again failed to find the back of the net as his goal drought for his country continues.

That, however, did not in any way diminish his performance against Nigeria. He was obviously not Ghana’s best player on the pitch. Neither was he the worst. He may not have found the back of the net but he played his part and left it all on the pitch.

He made some poor in-game decisions, though, and his end product sometimes left much to be desired. There was also the atrocious free-kick in the second half that reminded everyone watching of how frustrating he can sometimes be. But, overall, he was decent against the Super Eagles.

His lack of confidence upfront and his poor decision-making is still a concern, but Jordan often tracked back when Ghana lost the ball, tackled when he had to, pressed the opposition defenders and held up play very well, linking up with Gideon Mensah regularly on the left flank.

And yet when his game was done, a section of the fans decided to turn on him. For a game that saw such a huge turnout and represented a sort of reconciliation between the team and the fans, considering how brave and gallant the team were in their performance, the boos were utterly disappointing.

Jordan hasn’t been at his best for some time now for the national team but he didn’t deserve that on Friday. Sometimes a player can play well and not score and other times a player can score and not play well. Jordan was certainly in the latter category against Nigeria.

If after such a performance, Jordan can only get booed, then it leaves only one conclusion; that some Ghanaians now watch and judge him with a prejudiced mind. His uninspiring form for the Black Stars in the last 18 months has caused some to lose faith in him. So much so that all they now see him for is a footballer who is not in the national team on merit. To this end, nothing he does pleases them anymore.

Per Jordan’s own poor performances in recent matches, it’s completely justified to criticise him and he has often deserved those criticisms, but not on Friday. If fans can criticise his poor performances, then it’s only fair that they acknowledge him when he puts in a shift too, which he did against Nigeria, albeit not scoring.

Nobody is saying Jordan played like prime Cristiano Ronaldo against Nigeria, but he wasn’t the worst player on the pitch; he never stopped trying and it was therefore unfair to subject him to boos, especially on a day when he played better than he previously has for Ghana.

Swap Jordan’s performance for the prolific Victor Osimhen or the much-heralded Kelechi Iheanacho, and it’s clear to see who was better on the day. And yet the Nigerian duo aren’t getting such treatment from their fans.

For those who were not at the stadium at all or early enough, all they saw were the jeers and whistles aimed at Jordan when he was substituted. However, I’m glad that I was at the Baba Yara Stadium early enough to catch the pre-match warm-up session of the Black Stars.

At the time, the stadium was just over half-full. When Jordan came out of the tunnel, he jogged towards the Yellow Stand and was greeted by loud cheers. And that is the scene I would rather keep in my memory. 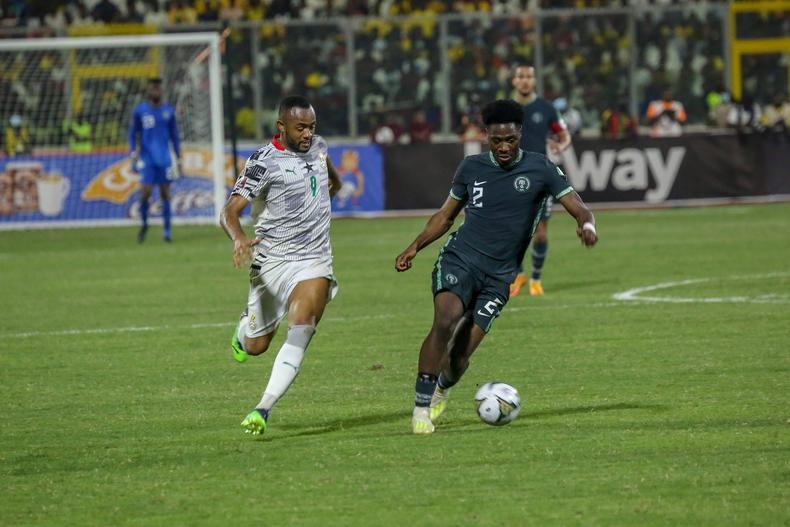 Otto Addo was forced to take responsibility for what he knew nothing about. During his post-match press conference, the Black Stars boss was asked about the boos. “They [the boos] were not for Jordan, they were for me,” he said.

Jordan is not above criticism but what he was subjected to on Friday only fuels the perception that he is being targeted.

And for the few fans that jeered at him, shame on all of you. Your act was utterly disgraceful!