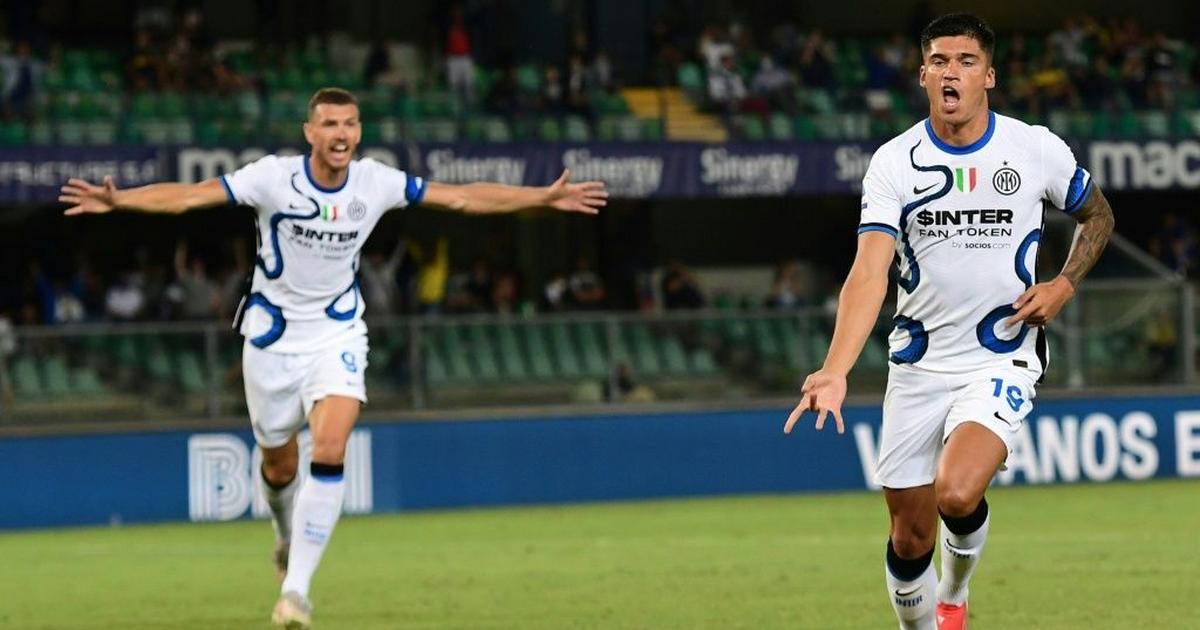 Correa completed his move to Inter from Lazio on Thursday and came off the bench to snatch the points for Simone Inzaghi’s side, who have begun their title defence with two wins from as many games.

The Argentina forward struck Inter’s second goal seven minutes from the end, leaping high to power home Matteo Darmian’s cross and complete a second-half comeback after Lautaro Martinez had levelled shortly after the break with a header of his own.

He added the cherry to the cake in stoppage time when he gathered the ball and fired home the third with a precision finish.

“I dreamed about coming here as a kid, I’ve put the Inter jersey on for the first time and thankfully we won thanks to my goals,” a joyous Correa told Sky Sport Italia.

“I want to thank my teammates, coach and the club who showed their faith in me and made me feel like I had been here for years.”

Defeat was harsh for Verona who had deservedly taken the lead through Ivan Ilic in the 15th minute and gave Inter a battle throughout the match, but they are pointless after their two opening fixtures.

Inzaghi, who replaced title-winning coach Antonio Conte this summer, has his new team singing from his hymn sheet with the players signed to replace departed stars Romelu Lukaku and Achraf Hakimi all slotting straight into place.

After Edin Dzeko and Hakan Calhanoglu shone last week against Genoa, it was Correa’s turn to snatch the headlines with his match-winning brace.

Martinez had a chance to put Inter ahead in the 13th minute of his season debut, but his close-range snap shot was well saved by Lorenzo Montipo.

Just two minutes later Verona took the lead through Ilic, who was quick to read that keeper Samir Handanovic was about to pass to Marcelo Brozovic and nipped the ball away from the Croatia midfielder before dinking home a classy finish.

Inter dominated possession but looked bereft of ideas as the well-drilled hosts initially kept a lid on Dzeko and playmaker Calhanoglu.

However Inter were level straight after the break with Dzeko pressure from an Ivan Perisic long throw leading to the ball dropping kindly for Martinez, who nodded home from close range.

Fresh from netting his 50th Inter goal, Martinez somehow lashed wide seven minutes later following another long throw and a Dzeko flick on, the Argentine’s left foot failing to find the target from just yards out.

Inter slowly started to squeeze Verona into their own half but beyond a well-saved Alessandro Bastoni drive Verona kept restricting their opponents to very little.

However Correa came to the rescue with his Cristiano Ronaldo-esque header on the day the Portuguese superstar left Italy for Manchester United and his superb second strike to keep the positive vibes flowing in Milan.

“I’m glad that he can enjoy this debut double because he’s a great player who will help bring us results.”

In Friday’s early match Udinese carried on their encouraging start with a comfortable 3-0 win over Venezia which follows up on their opening weekend draw with Juventus.

Goals from Ignacio Pussetto, Gerard Deulofeu and Nahuel Molina gave Udinese, from the far north-east some 100 kilometres from Venice, a deserved three points after a dominant display against their promoted rivals.