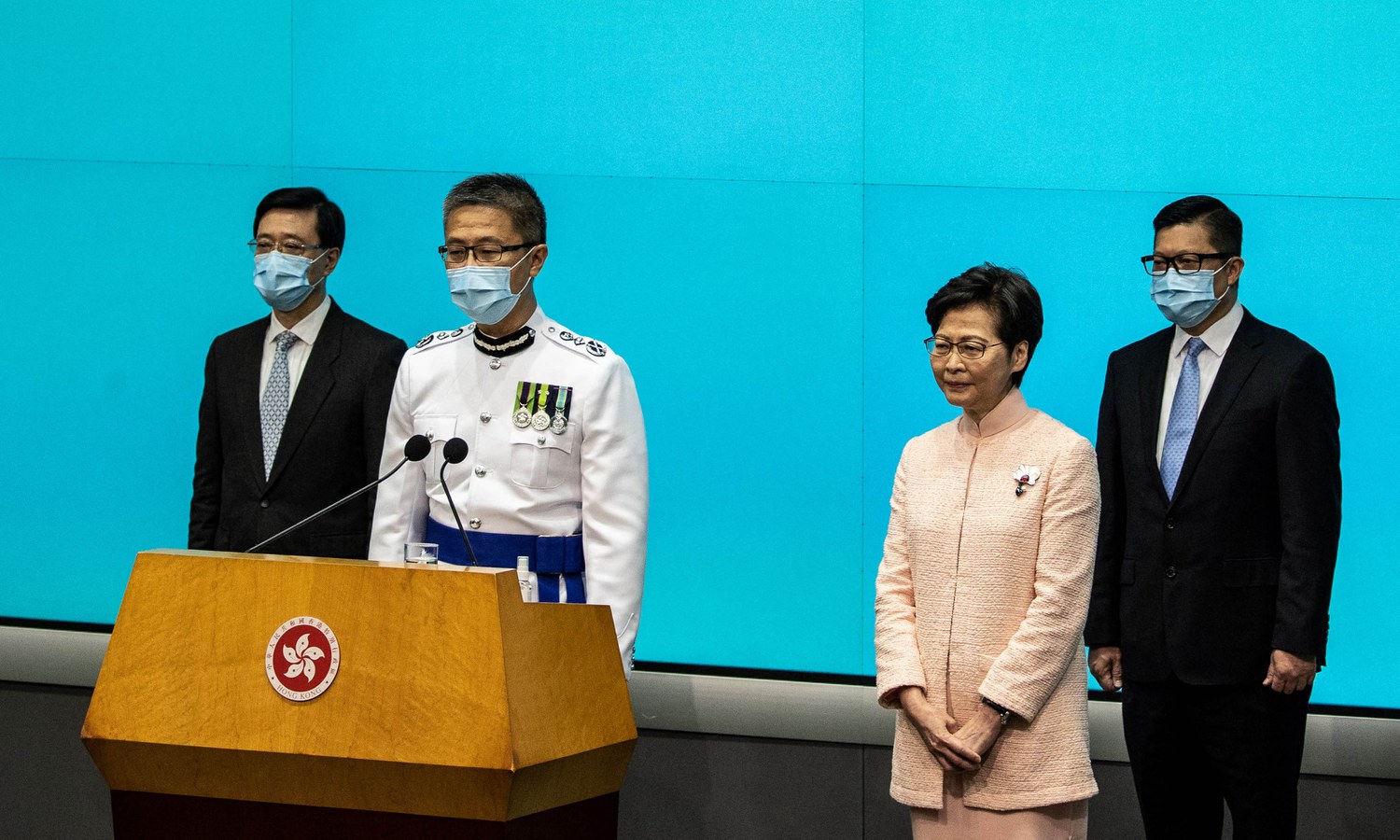 Hong Kong’s leader Carrie Lam announced a reshuffle of her cabinet on Friday, placing two ex-cops in key cabinet positions, including the police commissioner who presided over the widespread use of violence against mostly peaceful demonstrators during the 2019 protest movement.

Lee joined the Hong Kong Police Force in 1977, rising to the rank of deputy commissioner in September 2010, before serving as under-secretary for security.

Tang was commissioner of police throughout the 2019 protest movement, which saw widespread international criticism of police violence against protesters. He will be replaced by former deputy police commissioner Raymond Siu.

The changes come almost exactly one year after the CCP imposed a draconian national security law on Hong Kong that forbids public criticism of the Hong Kong and Chinese governments, as well as criminalizing overseas lobbying and fundraising efforts, and journalism that calls for overseas sanctions on foreign officials.

Lam, Lee, and Tang were all sanctioned by the Trump administration in August 2020 for “undermining Hong Kong’s autonomy and restricting the freedom of expression or assembly of the citizens of Hong Kong.”

“The recent imposition of draconian national security legislation on Hong Kong has not only undermined Hong Kong’s autonomy, it has also infringed on the rights of people in Hong Kong, allowing mainland China’s security services to operate with impunity in the region, mandating “national security education” in Hong Kong schools, undermining the rule of law, and setting the groundwork for censorship of any individuals or outlets that are deemed unfriendly to China,” the U.S. Treasury said in a statement at the time.

Lee told journalists that he would ensure that Hong Kong was governed by “patriots,” while Tang vowed to protect “national security” in the city, and eradicate domestic “terrorism,” as well as threats from “external forces.”

More than 1,000 people have been prosecuted and thousands more arrested, mostly for charges linked to “rioting” and “illegal assembly” under the Public Order Ordinance.

But the imposition of the national security law from July 1, 2020 launched an ever-widening crackdown on public dissent and political opposition that has seen dozens of former opposition lawmakers and democracy activists detained for “subversion” for taking part in a democratic primary in 2020.

The mass public protests — which Beijing claims were incited by hostile foreign powers fomenting a “color revolution” in Hong Kong — and the increasingly violent responses by protesters to widespread and excessive police violence, were cited as the main reason for the new regime.

Siu said he will continue to “lead the police force in a spirit of loyalty and connecting with the community to protect Hong Kong’s national security”.

The announcements came a day after the forced closure of the pro-democracy Apple Daily newspaper in the wake of a national security police raid that saw several of its journalists and executives arrested for “collusion with foreign powers” and its assets frozen.

On the day of the raid, Lee referred to Apple Daily journalists as “criminals,” while U.S. President Joe Biden called the paper’s closure a “sad day for media freedom” that showed “intensifying repression” by China.

The paper’s founder Jimmy Lai is currently serving time for “illegal assembly” in connection with a peaceful protest, and is awaiting trial for “collusion with foreign powers” under the national security law.

The paper was reportedly raided in connection with articles it had printed calling on foreign governments to sanction Hong Kong and Chinese officials, some of which dated back to 2019, well before the national security law took effect.

Under an immigration bill due to take effect in August, Hong Kong’s secretary for security will have new powers to order border guards to prevent anyone of any nationality from boarding any form of transportation leaving the city.

The bill has sparked concerns that the authorities may use travel bans to stem the current exodus of families and individuals from Hong Kong, as controls over freedom of speech and publication intensify, and as the government’s “national security education” program is implemented in schools.

Chung Kim-wah of the Hong Kong Public Opinion Research Institute (PORI), said the appointments of Tang and Lee are a break with the convention that much of Hong Kong’s government is run on a day-to-day basis by powerful civil servants.

“They are disregarding public opinion in appointing John Lee chief secretary for the administration,” Chung told RFA. “They want to break with the tradition of administrative officers running things, meaning that there will be far less of a political role for civil servants than there was in the past.”

Current affairs commentator Johnny Lau said the fact that Lee, Tang, and Siu all have a background in law enforcement is significant.

“It is a sign that the current hardline style will be transferred from the top-down dictatorship of law enforcement to the machinery of policy-making,” Lau said. “It’s a lot like the political and legal affairs committee system in mainland China.”

“Hong Kong is increasingly convergent with the mainland in implementing such a system,” he said.