John Legend is continuing to support his wife Chrissy Teigen after her alleged bullying tweets and messages resurfaced on social media.

The ‘All of Me’ singer was pictured outside his home in Beverly Hills on Wednesday. In photos obtained by The Daily Mail, Legend appeared to shrug off any controversy as he was seen smiling when he got into a car.

READ MORE: Every single one of Chrissy Teigen’s feuds explained

When asked about how Teigen is handling the ongoing criticism, Legend replied, “she’s doing great!”

His sighting comes after he showed his support for Teigen following her most recent apology for her past behaviour on Twitter. Legend retweeted the model’s open letter, with a quote from her Medium essay.

“We are all more than our worst moments,” he tweeted, adding three red hearts to the post to show support for his wife.

On Sunday, Teigen posted the lengthy apology after previous tweets of hers resurfaced in which she participated in online bullying and targeted Courtney Stodden, a model and reality TV personality. The 35-year-old had also targeted young stars, including actress Lindsay Lohan and reality TV star Farrah Abraham.

“Not a day, not a single moment has passed where I haven’t felt the crushing weight of regret for the things I’ve said in the past,” Teigen wrote.

“As you know, a bunch of my old awful (awful, awful) tweets resurfaced. I’m truly ashamed of them. As I look at them and understand the hurt they caused, I have to stop and wonder: How could I have done that?”

“I’ve apologised publicly to one person, but there are others — and more than just a few — who I need to say I’m sorry to. I’m in the process of privately reaching out to the people I insulted. It’s like my own version of that show My Name is Earl! I understand that they may not want to speak to me. I don’t think I’d like to speak to me. (The real truth in all of this is how much I actually cannot take confrontation.) But if they do, I am here and I will listen to what they have to say, while apologising through sobs,” she continued.

Teigen, who has 13.5 million Twitter followers, became embroiled in the bullying scandal in May.

In an interview with Daily Beast, Stodden revealed that Teigen sent them cruel direct messages, such as “I can’t wait for you to die.” Teigen has not posted on social media since her first apology on May 12.

READ MORE: What happened between Chrissy Teigen and Courtney Stodden?

“There is simply no excuse for my past horrible tweets. My targets didn’t deserve them. No one does. Many of them needed empathy, kindness, understanding and support, not my meanness masquerading as a kind of casual, edgy humour,” she wrote. “I was a troll, full stop. And I am so sorry.”

For support and advice regarding bullying and mental health, visit Lifeline.org.au or call 13 11 14. 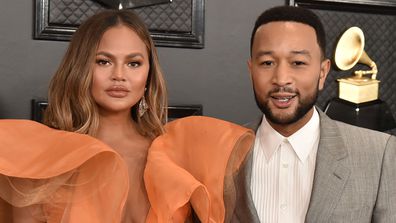